Rodrick Wayne Moore Jr. (born October 22, 1998), known professionally as Roddy Ricch, is an American singer and rapper from Compton, California. He rose to fame in 2018 with his single “Die Young”, which peaked at number 98 on the Billboard Hot 100. Ricch’s first two mixtapes, Feed Tha Streets (2017) and Feed Tha Streets II (2018), also received widespread acclaim. In 2019, Ricch was featured on Nipsey Hussle’s single “Racks in the Middle”, which earned him a Grammy Award for Best Rap Performance, and on Mustard’s Grammy-nominated single “Ballin'”, which reached the top 20 of the Hot 100.

In November 2017, he released his debut mixtape, Feed Tha Streets, which is also his first music project. It featured songs like “Chase Tha Bag”, “Hoodricch”, and “Fucc It Up”. The tape earned him praise from established rappers like Meek Mill, Nipsey Hussle, and 03 Greedo, as well as established record producer Mustard. In March 2018, he released an EP entitled Be 4 Tha Fame. In May of that year, Nipsey Hussle brought Ricch out as his guest at a PowerHouse concert in Los Angeles. 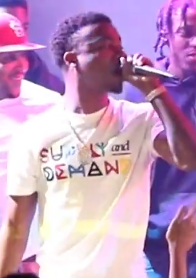